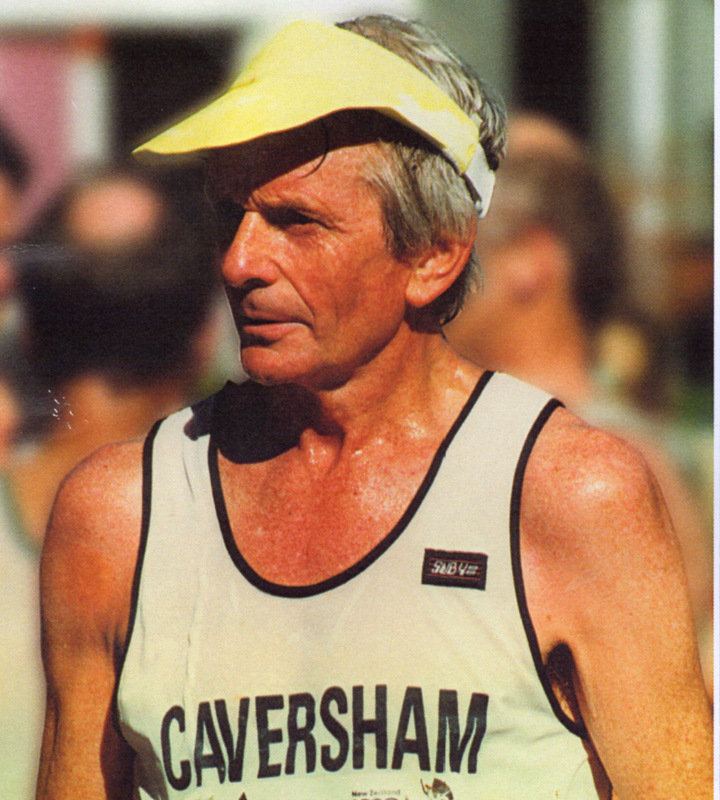 Pat Sidon, who joined the Caversham Club in 1948 and achieved fame throughout a glittering running career, considered himself fortunate to come into the club at a time when Caversham was in one of its strongest eras, with any number of top ranked senior runners willing to advise and encourage all junior members.

Pat came into prominence as a 14-year old at Kings High School when wining the first of three 2-mile school cross country titles, and joined Caversham immediately upon leaving school. "In those days the Club offered free memberships to the Kings High cross country winners and I was also a Caversham boy with my father being the stationmaster at the Caversham Railway Station, so Caversham was really the only club for me to join" Pat said. "When I first joined Gilbert Hebbard had all the Colts under his wing and following that I came under the guidance of Alex Barr, who was Club Coach for many years, and was my sole coach and adviser from that point on. Alex was certainly the biggest influence on my career and the one who brought the best out in me."

An early success for Pat came in 1950 when he won the National Junior Cross Country title at Palmerston North; he also has fond memories of his first trip to Christchurch for the Kennet Cup Steeplechase in 1949 held at the Riccarton Racecourse. "I was only a junior then but I lined up in the senior race, and finished sixth, which Jack Cain, who was manager of the Caversham team, reckoned helped to win us the team race" Pat recalls. "The following year I was still a junior and they barred me from the senior race, but I won the junior title anyway."

Pat represented New Zealand twice at the World Cross Country Championships, in Australiain 1957 and England in 1965, where he was team captain.

Pat attributed his success in cross country events to his ability to relax and find a good rhythm early in races. "In those days the fields were always big and the pace was on right from the start" Pat says. "I was seldom the pace setter but I usually found myself able to settle quickly and get to the front without too much effort. Staying relaxed is a key to successful running and something Alex Barr always drummed into me".

Pat was also a renowned track runner and won the Otago Mile title five times from 1956 to 1960. One of his proudest moments was winning the mile race held at Carisbrook in 1954 in front of the Queen, while he placed third in the National 1-Mile Championship in 1957, behind Murray Halberg and Neville Scott, in 4m 09s, at Hutt Park. "I wasn't going up there as I had a young family and the cost involved was too great. I was in Queenstown on holiday with my family when I received an anonymous donation to enable me to travel to Wellington for the race. I won a lot of Otago track titles but I simply couldn't afford to travel to the Nationals as in those days the money just wasn't around."

Pat qualified for the three miles at the 1954 Vancouver Commonwealth Games breaking the qualifying time of 13m 40s three times in one week. "But because I hadn't done it within the stipulated time frame I didn't get selected."

Variety was the key component in the training programme adopted by Pat and the other Alex Barr-trained runners. "I never considered running the magic 100 miles a week, the most I ever did was around 70 miles" Pat says. "We trained under the same system as the great Czech athlete Emil Zatopek which included long, slow running for strength but plenty of quality repetition work as well. We used to do a lot of speed work with Alex on the Corstorphine ground in the dark, carrying torches to enable us to get round. I often used to do 24 quarter-mile reps alternating between fast and slow. You read a lot about the tremendous mileage young runners are doing now under the "Lydiard System", but I wonder how many of them are following the system accurately" Pat says.

Pat enjoyed the many trips away and social times shared with his Caversham and Otago team mates. "We had some marvellous times together and it's great that this side of the sport is still going strong, in our Club at least."

Pat's advice to all young runners is simple - "Be dedicated, make the most of your opportunities but above all enjoy your running as without that you won't get far."

In later years, Pat enjoyed running three times a week through the Ross Creek tracks as he found the surfaces there were kind to two ailing knee joints.

One final question put to Pat: Will anyone ever beat your record in the Edmund Cup and Otago Cross Country events? "Probably not" he grins.

As a testament of the quality athletes Pat competed against, you'll recognise a lot of the runners in this list - an extract from Vern Walker's recent book "Peter Snell and the Kiwis Who Flew" - click here